Prep school fee increases show no sign of slowing, but now parents can find the ones that offer best value for money.

One of the difficulties parents had with choosing a prep school was that there was no data to compare them. Senior schools, for instance, can be compared by exam results, however limited that measure is. Too few prep schools sit SATS so exam performance isn’t available to would be prep parents.

As you know by now, all that has changed. The Schoolsmith Score enables a valid comparison between prep schools across 50 different criteria. And if you need a refresher, there’s more on that here.

It also allows us to get a sense of value for money at prep schools. It should be that the higher the fees, the higher the Schoolsmith Score. And, as the graphic below shows, that is generally the case. 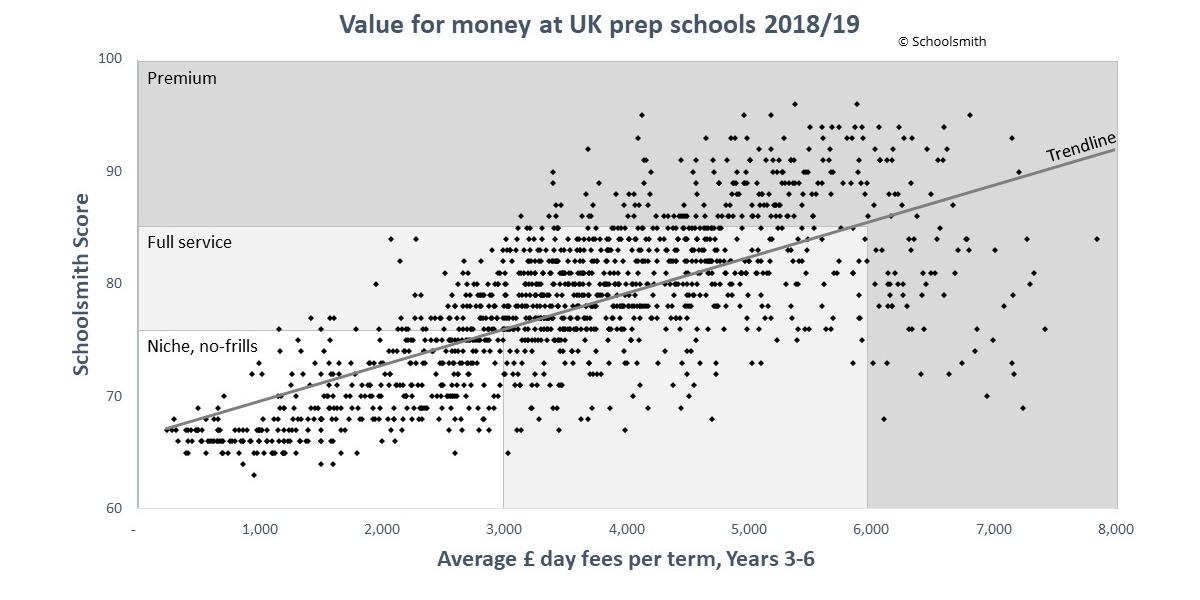 Of course, we use such a graphic to find the outliers; those that offer greater value for money, and those that don’t.

The first thing to note is the trendline. There are 1,400 prep schools on the graphic, and they will fall above or below the trendline. Those below the trendline offer less value for money, those above offer greater. It’s not a hard and fast trendline. Perhaps it should be a trend-band, acknowledging that some schools operate in expensive overhead areas, others cheaper. But the deviations from the trend can be significant, and, I might argue, competitively unsustainable.

The second thing to notice is the arbitrary zones I’ve indicated as no-frills, full service and premium. These reflect the fact that schools have different target customers and competitive positionings. Contrary to the jist of some commentators, cheap doesn’t mean good value.

School fees continue to increase at the same rate

How a school adjusts its offer to offer value is becoming newsworthy. Much has been made over the last two years about how unaffordable school fees have become. In response, some schools have dropped their fees to get closer to the trendline. And some have dropped fees and cut elements of their provision. But not very many. On the flipside, upward pressures on fees, in particular from increased teacher pension contributions, have countered any decrease. And there are school fee extras. More about those here.

Take a look at the graphic. It shows the distribution of fee increases for all prep schools over the last six years. (2019-20 is only 60% complete at the time of writing). 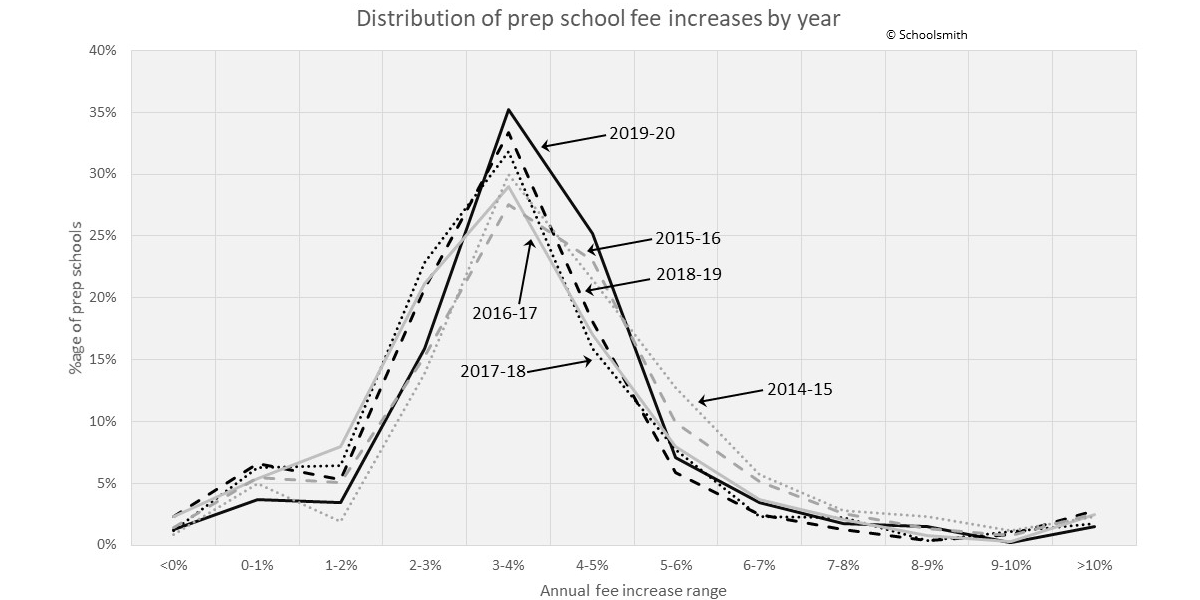 Every year, the distribution of fee increases follows a bell curve pattern, peaking in the 3-4% range. See how similar the bell curve shapes are. There is no significant difference between them. 2019-20 may be showing a shift to the right, with more fee increases in the 4-5% range. So much for the decrease then!

Fees can’t rise unchecked forever. So far, there has been little anchoring of prep school fees to value. The Schoolsmith Score is a tool that can change that.

Share on TwitterShare on FacebookShare on LinkedInShare on E-mail