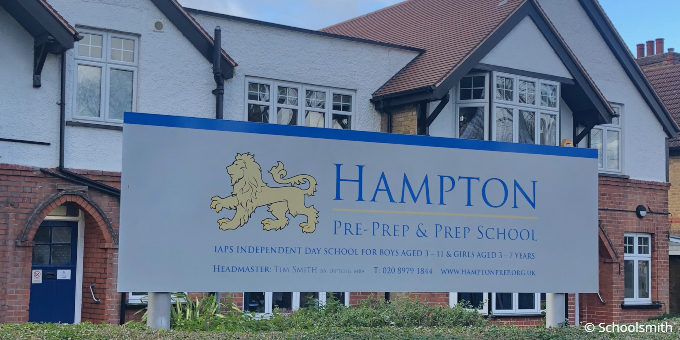 Schoolsmith Score®; 83.
One of the best independent prep schools in Hampton and one of the 3 best primary schools for 1 mile.
On average, 18.4 pupils per class and 11.5 pupils per teacher, from Year 1.
Just over 50% of boys go on to the senior school, a highly academically selective school. Of the 9 or 10 other destination schools, the majority leave for independent schools such as Halliford, Reed's or St James'. Girls leave to join the prep departments at academically selective day schools; principally (70%) The Lady Eleanor Holles School.
School curriculum also includes PSHE, STEM, French, Latin. There are a small number of academic clubs.
Specialist teachers for sport, music, languages, art, DT and computing throughout, and for most subjects from Year 3.
Comprehensive programme of visitors, day trips and residential trips (cultural, field and adventure). All pupils in Years 3 to 5 participate in the LION (Leadership, Independence, & Opportunities to Nurture) Award, an age adapted Duke of Edinburgh Award style programme.
School offers over 15 different sports. Representative teams in major sports from Year 3.
Art, music and drama are taught as discrete curricular subjects to all pupils. Over half the pupils learn a musical instrument (from Year 3). Choir, orchestra and several instrument ensembles. Over 5 different visual and performing arts clubs per year group per term.
As the prep school to Hampton School, pupils can expect access to specialised teaching and facilities, as well as eventual progression to the senior school.