The typical prep school has twice as many facilities as a state primary. The typical independent senior school, however, has less facilities than the typical state secondary.

There’s a complicity in contradiction about school open days. Heads and staff will state that there is more to a school than its facilities. Parents will agree. And yet, a school open day is essentially a procession around the school’s resources in much the same way as we might look round a car showroom. And what will a parent remember at the end of an open day? On what basis will little Johnny spend the next 6 or 7 years in this institution? The stripes on the lawn? The clever 3D printer thingy?

Do better facilities lead to a better education? I wrote an article about this here.

There are other received wisdoms about school facilities. Do independent schools really have better facilities than state schools, for example. Are schools in cities facility impoverished? What facilities should a parent expect? Come to that, what facilities does a typical school have anyway?

To answer these questions, I counted the facilities in 5,000 mainstream UK schools. 3,000 prep and primary schools. 2,000 senior schools. I don’t get out much.

By typical, I’m referring to the median. The facilities of a typical (median) state primary might be a playground, with climbing frames, a school hall (for PE, assemblies and performances), a separate learning support room and maybe an activity room for music, art or practical work. 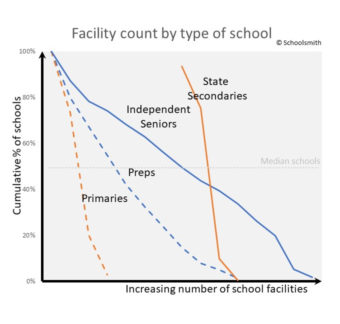 Of course, there’s a range of schools, some with more facilities, some with less, as the graphic shows. But the number of facilities at a state primary is fairly consistent across the country. And that’s probably not surprising given the fact that the state funds provision. Sometimes schools have a grassed games area, and maybe a dedicated library, as opposed to class-based library “areas”.

Over the last few years or so there has been a trend to accommodate outdoor learning, with a gardening/planting area, dipping pond and an outside classroom. Technology will be whiteboards in the classroom, and children will have access to computers, either in a dedicated room, or from a trolley of laptops or tablets.

You may think this small; many parents of pre-school age children do. My surveys suggest that such parents expect facilities at this stage to resemble those of a senior school. Which may be explained by the fact that their lasting memories of school are of their own time at senior school. Not so at primary level. Primary schools are small, local and most teaching is in a single classroom.

Prep schools have more facilities than state primaries, on average, twice as many. And the graphic shows that there is less uniformity in the number of facilities provided by schools. In addition to state primary facilities the typical (median) prep school will have a dedicated sports hall, an artificial or grass games pitch, a dedicated art/DT room, a music room and a library.

It’s worth noting that several hundred prep schools have more facilities than the median prep school. But when a prep school boasts about having facilities to rival a senior school, you should treat the claim with a pinch of salt. This data, at least, doesn’t support many instances of that.

Senior schools, state and independent are far larger than primaries and preps, and so will have more of each facility. And more age appropriate ones too. For example, there will be more science labs at a senior school and the facilities will cater to more advanced curricula than at the primary level.

The increase in facilities is substantial. The typical (median) state secondary school will have grass pitches, synthetic pitches, tennis/netball/basketball courts, a sports hall, a gymnasium and a fitness suite. There will be dedicated studios for art, drama, dance, music and music technology rooms, and a well-appointed performance space. Academically, look for dedicated subject corridors and buildings, including a learning resource centre/library, design technology workshops and science labs. IT facilities may include teaching rooms, but the typical state secondary will have a strong wi-fi network supporting use of laptops and tablets in class. Teachers and pupils will share resources and homework submissions across a technology portal, accessible from school and home.

Note again, how uniformly state secondary schools are furnished with teaching facilities. Compare this to the independent senior schools whose facility count varies.

Contrary to the stereotype, the typical state secondary school has more facilities than the typical senior independent school. This possibly reflects two things; size and purpose. The median independent senior is smaller than the median state secondary. Smaller schools tend to have a smaller range of facilities (as well as a smaller number of each one). As for purpose, the broad coalition of schools that are independent include those that specialise; notably in a faith curriculum (I discuss this in this article) or in particular subjects. In either case particular facilities may be deemed superfluous.

That said, the graphic also suggests that around 400 independent senior schools have more facilities than their state counterparts. These are the ones that make all the headlines. 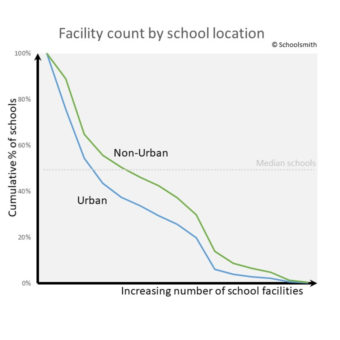 The facility count for 6th form colleges is lower than those for secondary schools. Some have excellent extra-curricular facilities, but 6th Form Colleges exist to secure exam results. Investment in facilities reflects the courses taught. And that usually means academic or at least examined subjects.

Variation in school facilities by location

The received wisdom is that non-urban schools have more facilities than urban schools. The logic is that land and the cost of building are cheaper out of cities. And that is confirmed by the research.

Is it different for all-through schools?

Primary aged pupils at an all-through school can benefit from the facilities at the senior division. (See here). Usually, the primary (or prep) department is housed in separate self-contained accommodation with access to some senior facilities.

How much access and to what facilities is the moot point. Schools tend to overplay the access to senior facilities card because, let’s face it, senior school facilities are more impressive than those at a primary. I think the graphic also illustrates that. But it is for you to decide how much access your 9-year old will have to the senior school’s chemistry lab, laser cutter, 25m swimming pool or water-based Astro.

Use of community facilities

If all-through schools muddy the facility count water, shared (Federated Schools) and community resources can completely cloud it. If a school has access to the swimming pool at the local leisure centre is that a facility or not?

Furthermore, it is often a local planning stipulation that new school sporting facilities are built for dual use; school use during the school day and community use out of school hours. Of course, this applies to state schools, but increasingly independent schools too.

You might argue that access to community facilities makes a facility count redundant. If so, choosing a school based on its proprietorial facilities becomes redundant. And if that’s the case, the current format of the school tour becomes redundant, unless it includes a trip to the leisure centre too.

You can read more about typical school facilities in the following posts;

Share on TwitterShare on FacebookShare on LinkedInShare on E-mail