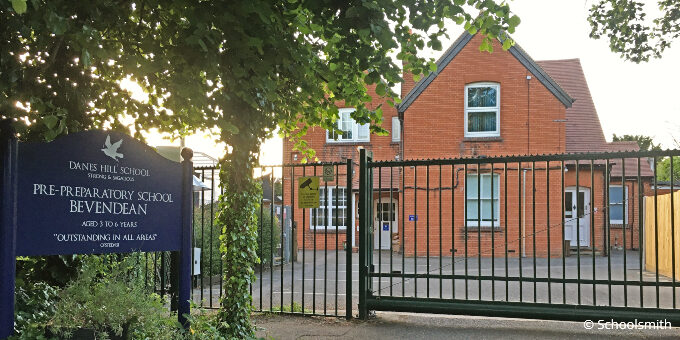 Independent prep school and nursery in Oxshott, Leatherhead.
For pupils aged 3 to 13 years.
Mixed school (about 60% boys).
Day school.
Not a school of religious character.
Academically selective intake from Year 3.
Very large school with an average of five classes per year.
Standalone prep school, not tied to any one senior school.
Danes Hill Preparatory School fees range from £4,807 (Rec) to £6,780 per term (2019/20).

Schoolsmith Score®; 90.
One of the best independent prep schools in Leatherhead and one of the 4 best primary schools for 3 miles.
On average, 17.8 pupils per class and 14.2 pupils per teacher, from Year 1.
Destination schools for Danes Hill Preparatory School pupils typically rank in the top 5% of UK schools by academic achievement. Pupils go on to one of 40 independent secondary schools, mainly at 13, though 20% of girls leave at 11+. St John's Leatherhead accounts for 25% of leavers, Epsom College and Cranleigh account for another 15% each. 40-50% of pupils win awards and scholarships.
School curriculum also includes PSHE, French, Spanish, German, Latin, Greek. Forest School for the youngest pupils. There are over 5 different academic clubs per year group per term.
Specialist teachers for sport, music, art, DT, drama and languages throughout, and for all subjects from Year 6.
School has a CReSTeD recognised dyslexia facility.
School offers over 20 different sports. Competitive teams in major sports from Year 3. In recent years the school has enjoyed national success in athletics, cross country, football, golf, hockey, netball, rugby, rugby 7s, shooting, skiing, swimming.
Art and music are taught as discrete curricular subjects to all pupils. Over half the pupils learn a musical instrument (from Year 3). 3 choirs, orchestra and 9 instrument ensembles. Over 10 different visual and performing arts clubs per year group per term.
School has an accredited Gifted & Talented programme.