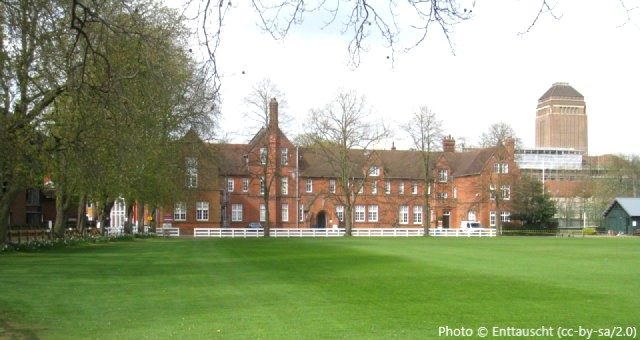 Independent prep school in Cambridge.
For pupils aged 4 to 13 years.
Mixed school (about 60% boys).
Day and boarding school. Around 10% of pupils board, 80% are full boarders and 20% are weekly or flexi boarders. Boarding starts from Year 4 for boys only.
Religious character; Church of England.
Choir school. Academically selective admissions policy from Year 3. Choristers selected on singing ability.
Large school with an average of three classes per year.
Standalone prep school, not tied to any one senior school.
King's College School, Cambridge fees range from £4,485 (Rec) to £5,695 per term (2021/22).

Schoolsmith Score®; 91.
One of the best independent prep schools in Cambridge and one of the 3 best primary schools for 1 mile.
On average, 17.2 pupils per class and 8.2 pupils per teacher, from Year 1.
Destinations for just over 70% of King's College School leavers is a Cambridgeshire independent school. The most popular are Perse Upper School (24% of leavers over the past three years), The Leys School (19%), King's Ely (15%), and St Mary's School (6%). Of the 30% who move on to a more distant school, the most popular of the 10 or so destinations is Oundle School (8%). 30-40% of pupils win awards and scholarships, the majority being for music or academic.
School curriculum School curriculum is based on the National Curriculum and the ISEB Common Entrance curriculum. It is thematic in pre-prep, with cross-curricular topics. The curriculum also includes PSHCE, French, Spanish, Latin, Greek.The school is one of the 50 prep schools with the most extensive academic and hobby extra-curricular programmes in the UK.
Specialist teachers for music, languages, and sport throughout, for art, DT, computing, and Latin from Year 3, and for most subjects from Year 5.
The timetabled enrichment programme, 'The Cresco Division', focuses on Choral training and STEM for younger pupils. Years 6 to 8 have more options including literature, drama, dance, critical thinking, Spanish and archaeology.
3 or 4 games afternoons and a double PE session per week. School offers between 10 and 15 different sports over the course of the year. Competitive teams in major sports from Year 3. In recent years the school has enjoyed national success in hockey, orienteering, squash.
School educates the choristers of King's College, Cambridge. The choir was ranked 2nd best choir (with children) in the world by Gramophone Magazine in December 2010. The Schola Cantorum for girls in Years 6 to 8 aims to provide girls with similar opportunities. Art, music and drama are taught as discrete curricular subjects to all pupils. All pupils learn an instrument in class and the majority take extra-curricular instrument lessons from Year 3. 5 choirs (including the Cathedral Choir), two orchestras (70-80 strong each) and 40 instrument ensembles. The school offers each pupil between 5 and 10 different extra-curricular creative and performing arts clubs.
Wraparound care from 8.00am to 6.00pm. Facility for occasional boarding.